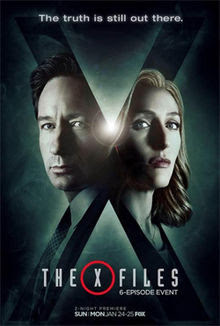 I guess a lot of us got pretty excited on hearing that The X-Files were being re-opened after a fourteen-year hiatus. Funny how little Mulder and Scully have aged - is this the wonder of studio make-up or alien intervention? David Duchovny and Gillian Anderson slipped quickly back into character, although I detected an element of "tongue-in-cheek" as they recycled the government cover-up mythology on which the series hangs.

There was a new kid on the block (though not for long) who'd suffered multiple alien abductions, and we had a nervous wait for DNA tests on Scully to come back with the result we all expected. I remember reading back in the show's heyday that one in three Americans believed they'd been abducted and "probed" (mostly anally: does this tell us something about US obsessions or anxieties?). Like Mulder, I (sort of) Want to Believe.

Anyway, well done, Chris Carter, for bringing Fox and Dana back into our lives; it was like a jolly Friends Reunited event. These revamps tend not to have a long shelf-life (Upstairs Downstairs and Dallas come immediately to mind) so we must seize the moment and enjoy Scully and Mulder (and Skinner) while they're back on our screens. It almost certainly won't be as good as the original run (nothing ever is), but I felt a real thrill being back in the world of massive government conspiracies, which for some people is the same as the real world of today - and tomorrow.

The Truth is Still Out There - somewhere.
Posted by David Gee at 02:35 1 comment: