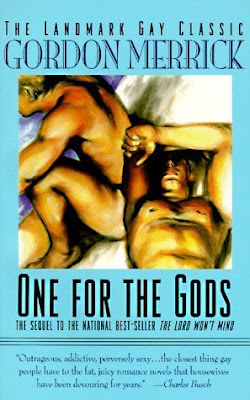 Gordon Merrick: ONE FOR THE GODS

I’m still ploughing my way through some of the gay ‘classics’. Originally published in 1971, this is the first of two sequels to The Lord Won’t Mind, Gordon Merrick’s ‘landmark’ novel about gay love and gay sex in postwar USA. Our hunky well-endowed heroes Charlie and Peter are on an extended holiday on the French Riviera. Charlie is heartbroken when Peter two-times him with a cute local lad. After this little hiccup they join their rich friends Jack and Martha for a cruise to Capri and the Greek islands. More hiccups.

The yacht trip begins with a night storm which is almost in the Herman Melville league. Then Charlie, who has bisexual tendencies, decides he wants to have a child with Martha. He also – spoiler alert – wants Peter to have sex with Martha, at which point the novel unravels into tawdry melodrama.