What I'm reading: An autistic view of civil war 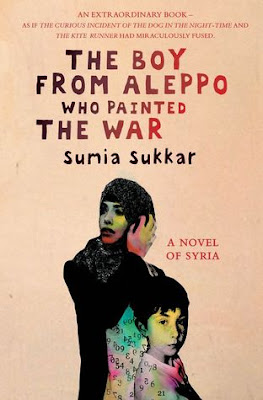 A first-person narrative of Syria’s civil war is bound to make a harrowing read – even more so when the narrator is an autistic teenager. As the battle between government forces and the rebels (ISIS is never named) intensi-fies, 14-year-old Adam, already traumatized by his mother’s death from cancer, finds the bombings and the disappearances impossible to understand. Painting, in vibrant colours, is his only refuge; “I’m painting the blood on the floor with real blood.” Grief drives Baba, his father, into dementia. Yasmine, the beloved sister who has replaced Adam’s mother as his protector, is abducted. Then, with Aleppo self-destructing, the family flee the city and take to the road to Damascus as refugees.

Sumia Sukkar has done a brilliant job of entering the autistic mind. She gives Adam a unique perspective: “Maybe bad angels haunt our town, or maybe this is the bad angel’s town.” Inevitably one is reminded of Christopher in The Curious Incident of the Dog in the Night-Time and Dustin Hoffman’s Raymond in Rain Man, Adam’s unforgett-able progenitors. Two brutal scenes are told from Yasmine’s viewpoint, and I rather wish the author had done the same with other family members.

This is a book from the “Misery Memoir” shelf, which I don’t often pick from. It’s an intensely disturbing portrait of the unending agony of Syria. Appalling to think that terrors like these still constitute the everyday life of people not only in Syria, but in Iraq, in Libya and in Yemen. Will the unlearned lessons of history ever stop being repeated?