What I'm streaming: Pride without Prejudice 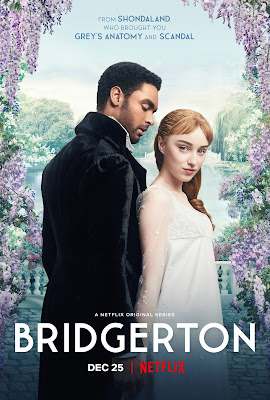 Goodness me, this is the most startling recreation of Regency England since Elizabeth Bennett and Mr Darcy found zombies on their lawns a few years ago. Bodices are more spectacularly ripped than we usually see in Jane Austen adaptations, although the fundamental challenge of finding a rich titled husband for your cosseted (and corseted) daughters is still at the heart of the story. This is a Georgian Downtown Abbey, quite a bit raunchier and a lot more downmarket.

What sets Bridgerton apart is its “colour-blind” casting. Simon, Lord Hastings, our dashing hero (and boy, is he dashing!) is played by a black actor (Regé-Jean Page), as are many of Queen Charlotte’s queen’s courtiers and even the Queen herself (Golda Rosheuval). It takes a bit of getting used to – I kept thinking (very unPC, unBLM) that we were in Louisiana and (oh, happy thought) the slaves had taken over the plantation. But the casting is the key ingredient that gives Bridgerton its big dollop of freshness. Phoebe Dynevor’s Daphne Bridgerton, whose on-off relationship with Lord Hastings is at the core of the drama, gives a feisty modernist performance, but she rather pales (if I may use that word) in comparison with some of the other debutantes.


The Simon-Daphne romance gets too much screen-time, as does Miss Thompson’s unmarried pregnancy and the mystery identity of gossip-monger Lady Whistledown (voiced by Julie Andrews who, alas, does not appear onscreen). Bridgerton plays out as a period soap, which is what Jane Austen’s intricate social comedies tend to be reduced to for viewing audiences. Mad King George is barely glimpsed, and the Prince Regent not at all. The one gay couple at court seem to have fallen foul of censorship or more likely the cutting-room shears; let’s hope this is redressed in Series Two.

Series Two? A decade from now we’ll be in Series Ten. This is pure tosh, lavishly costumed and backgrounded, and it will run and run.