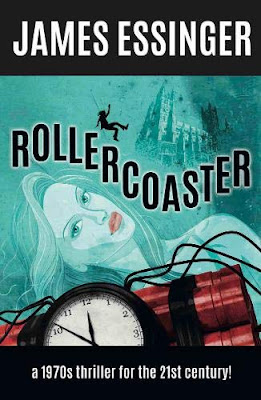 In a preface James Essinger warns the reader that you might find the author of this comedy thriller ‘somewhat bonkers’. It’s a book he wrote in the 1970s and is only now bringing to print. With a hippie hero who has created his own slang (like Alex in A Clockwork Orange, 1971) and a supporting cast with names like Terrapin and Tortoise (and a security chief called Pickling Fox-Foetus), I was reminded of  BBC 1950s radio hit The Goon Show and (two decades later) television's Monty Python. The story has terrific pace, but ‘bonkers’ barely begins to describe it!

Ancient eccentric Dr Tortoise sends wannabe-hitman Terrapin to Marseilles to kill some renegade Finns who are planning a terrorist outrage to avenge the brutal Russian occupation of Finland during World War Two. The wartime chapter is the one that isn’t funny – it’s extremely powerful – but the rest is a helter-skelter of comedy disasters. John Gardner (who later wrote a dozen or more James Bond adventures) began his career with a series featuring an inept MI5 assassin called Boysie Oakes – The Liquidator. Before Boysie there was The Dolly Dolly Spy in the 1960s, the first of a quartet of Carnaby-flavoured spy novels by Adam Diment. Rollercoaster clearly belongs in this quirky company. As a first novel forty-plus years ago I would have given James Essinger a schoolmasterly report: ‘Shows promise. Needs discipline.’ A zany, nostalgic romp.