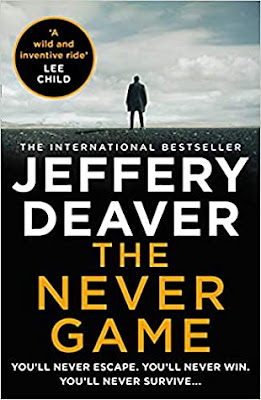 After Lincoln Rhyme and Kathryn Dance, Jeffery Deaver launches a new series centered on Colter Shaw, a freelance investigator of Missing Person cases. He doesn’t like to be called a bounty hunter but the reward money is what draws him in. Here he investigates a trio of abductions in which the victims are put in deadly peril with a handful of survivor items similar to those supplied to avatars in video games. The prime location is California’s zillionaire Silicon Valley, and the link to producers of online gaming will prove to be the key to unravelling the mystery.

This clearly is a Book for Our Time when too many of our kids (or of us) are addicted to violent video games. The story has great pace, moments of terrific tension, a few crafty red herrings and then a rattling series of final resolutions.

There’s a romantic element that fails to catch fire. And I didn’t entirely warm to the crisp new style Deaver develops for this new series. Very short sentences. But these can have an impact of their own: “Her nature was clothed in kindness. Under-neath was iron.” An up-to-the-minute thriller about the dangers that lurk in a certain kind of game for a certain kind of gamer, this is sure to win Jeffery Deaver some new fans.