What I'm reading: Space opera with echoes of DUNE 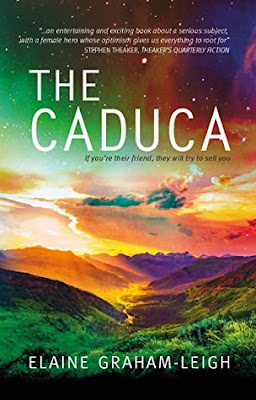 It’s been a while since I read any science fiction or fantasy. I have fond memories of Philip José Farmer’s Riverworld series and also John Norman’s naughty un-PC Gor chronicles. Now Elaine Graham-Leigh has taken me to another vividly realized corner of the universe.

Centuries into the future and many millions of miles across our galaxy, the planet Benan Ty is an Earth-colony ruled by a not-quite-benevolent dictator. The ViaVera guerrillas are trying to launch an insurrection. And the galaxy’s most powerful nation, the blue-skinned Chi!me (that rogue exclamation mark is the author’s, not mine!), send an untested female envoy, Quila, to broker a peace deal. Fate crosses Quila’s path with that of Terise, a woman at the heart of ViaVera. Oppression and betrayal generate tension throughout this epic story. The messianic figure of the ‘Caduca’ provides a faint hope for the very distant future.

Colonial power versus revolution: this is as much a major backdrop to sci-fi as it has been to the annals of our own planet. I sometimes felt that the Vietnam War was being re-orchestrated in all its grim glory. Elaine Graham-Leigh gives her faraway colony and her two female protagonists a rich and believable history. There are echoes of Frank Herbert’s magisterial Dune saga, which sets Graham-Leigh up there with the giants of the genre.