David at the movies: Noises that kill 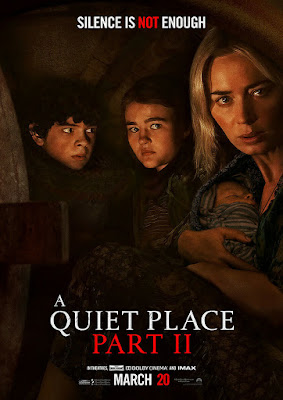 Two years after Part One, the sequel begins with a flashback to the day the aliens arrived, with stormclouds like those that heralded invasion in Independence Day. So we see Evelyn Abbott (Emily Blunt) fleeing the creatures with all her family. Then we resume where Part One ended, with the survivors – Evelyn and the two teenagers, plus the baby – looking for a new place to stay. They shelter in a derelict factory with Emmett (Cillian Murphy), an ex-cop. A radio station signal suggests that there may be others still alive, but finding them in a world terrorized by the killer critters is not going to be easy. Any loud sound – and especially a scream – brings predatory monsters.

Obviously, the inspired nerve-shredding originality of the original movie is no longer fresh, but the script and the direction are just as tight. The cast are in fine form, especially Regan (Millicent Simmonds), the deaf daughter with superhero bravado. Not quite as many jumpy moments as Part One, but there's enough tension to keep you on the edge of your seat.