David at the Movies: Feudal fighting in the far-distant future 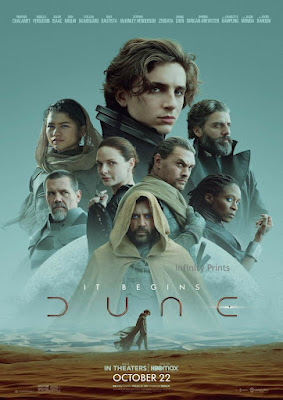 This is a somewhat less chaotic adaptation of the epic novel by Frank Herbert, which I read in the 1960s but don’t remember well enough to help me through the labyrinthine plot. Set hundreds of years in the future in a distant galaxy, there is (there has to be) interplanetary war going on. Paul Atreides (Timothee Chalamet) arrives with his father on the colonised planet of Arrakis, which has a desert rich in a hallucinogenic spice worth more than gold. Others have eyes on this treasure. The natives of Arrakis are waiting for a messianic Mahdi – is it Paul?

There are wonderful sets and production values here, as (let’s be fair) there were in the David Lynch 1984 version. The CGI is, as it has to be, out of this world. It seems odd that even in this far future with amazing flying machines (I particularly liked the dragonfly helicopters), feudal hand-to-hand combat is still key to warfare. I came away with a feeling of Star Wars meets Kingdom of Heaven. I’m an admirer of Chalamet, but he rather lacks the charisma that Paul Atreides calls for.

The giant scenery-chewing worms are, once again, the real stars, though I still have a soft spot for those in 1989’s Tremors!