What I'm reading: Bi-guys don't get the best of both worlds 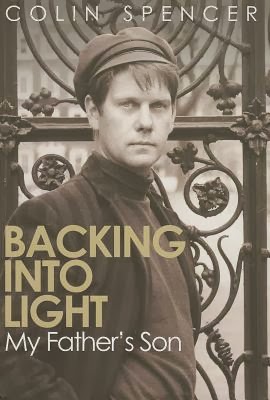 Colin Spencer, now in his seventies, is best known for his cookery books and a long-running food column in the Guardian, but back in the 1960s he was a leading novelist and playwright, much admired - especially by me. His quartet A Generation is one of the finest novel sequences of modern times and I would rate The Tyranny of Love (Part Two of the quartet) as one of the best novels written in my lifetime. Bisexuality is a major theme in the quartet and Spencer's handling of this prickly subject is as good as James Baldwin's in Another Country, one of the most significant novels of the 20th century.

Subtitled My Father's Son, Backing into Light is a short autobiography, highly 'confessional' in the style of Alan Bennett's diaries, filled with vivid family members - not just Spencer's loud brutish father and long-suffering religious mother, but aunts and uncles and neighbours - and his dad's mistresses, openly paraded before the family. Spencer had a love/hate relationship with his dad but, as the subtitle implies, he acknowledges how much he takes after him. He says that they came close to killing each other at different times (and once, curiously, he almost murdered his adored mother).

His unruly family life provided a rich seam which he mined for his fiction. For an admirer of his novels it's fascinating to learn the story behind his books: not many authors are as candid as this. But the rumbustious comic tone that underscores his quartet is conspicuously lacking here. This is almost a 'misery memoir': his home life was unbearably wretched, he was unhappy at school, dropped out of art college, came close to a nervous breakdown during National Service - woe upon woe. Only when his sex life gets going in his twenties does he start to enjoy himself. As a successful writer and artist he meets some seriously fascinating people: Forster, L.P. Hartley, Rattigan, Diana Athill.

Becoming the 'toy-boy' of John Lehmann, editor of the prestigious London Review, gave his writing (and artistic) career a serious boost, but he was lucky enough to have publishers beating a trail to his door, something which today mostly happens to celebrities from non-literary fields. He ends this memoir without explaining why his projected quartet became a 'sequence' and then fizzled out after Victims of Love (1978), which clearly did not complete the saga of Matthew and Sundy Simpson. In a throw-away line he says that Reg, the bisexual husband of Sundy (and lover of Matthew) is based on a schoolfriend, but the character reads like another side of the author who is surely both Matthew and Reg. It would be great if writing this autobiography could 'unlock' whatever it is that held Colin Spencer back from continuing with his towering novel sequence. Cookery's gain was very much literature's loss.

He's very honest about his bisexuality. Sexually and emotionally he was always drawn to both men and women. His marriage to a girl he'd loved since their schooldays was a wretched failure and his description of their parting and divorce is one of the most acrimonious I've ever seen.

Back when he was a novelist he alternated the volumes of A Generation with some zany comic novels and zanier plays. Gore Vidal famously did the same thing but Vidal's writing, even at its most satirical and vitriolic, was always tightly controlled. Spencer's writing - and his life - has been mercurial, volcanic. He has had an amazing number of lovers, male and female, but the disintegration of his marriage hangs over this bitter memoir like a black cloud.

Backing into Light reads like a 'stream of consciousness': I suspect that it was dictated and transcribed. The writing is sometimes scrappy and repetitious - more editing needed (a bugbear of mine!), although to some extent this clumsiness underscores the sheer raw intensity of the life being revealed. If you think bisexuals have twice as much fun as 'normal' people, think again: they have twice as much anguish.
Posted by David Gee at 02:52 No comments: