LILLIAN AND THE ITALIANS: Two more reviews on my Blog Tour

Two five-star reviews I garnered during my US Blog Tour with Gay Book Promotions this week:

Juniper Greer-Ashe's review
Sep 23, 2021
it was amazing
There’s something about this book that just feels beautifully crafted: the world building is careful, deliberate, and thorough: it brings to life a glittering picture of Italy in the 1960s and the complicated codes of conduct that regulate it. The characters too are finely drawn: they’re each so much more complicated than they might seem at first glance, and their stories unfold through a series of revelations and insights that makes them, and their experiences, feel nuanced and real. Lillian gets more and more compelling, the more time she spends on the page, and her search for her son is an exercise in love and growth that it’s impossible not to get caught up in. The Andrew we see through her eyes at first both is and is not the one she finds herself looking for as the story goes on, and that just adds to the overall sense that this is a journey worth going on.
Susie Umphers
5.0 out of 5 stars Excellent novel
Reviewed in the United States
An excellent, serious book with the beauty of Italy acting as backdrop to a story
about the mafia and kidnappings, but more importantly about family and how
we both know our family members and don't know them. There are excellent
depictions of m/m and m/f relationships here. This is an author I want to read
more of.
Posted by David Gee at 02:20 No comments: 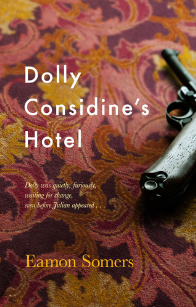 Julian Ryder, 18 in 1983, gay and with literary aspirations, relocates to Dublin and gets a job as a barman in Dolly Considine’s hotel. Dolly is firmly involved in Irish politics, where the issue of the day is Abortion Law Reform. A parallel story in the 1950s provides the background to Dolly inheriting the hotel and struggling to keep herself afloat. Times are hard in both eras, especially for unmarried mothers, but despite endless money worries people seem always to have the price of a Guinness.

The author has set himself a challenge in this debut novel, juggling a large and vivid cast of characters through haphazard time shifts. His writing is invigor-ating, with occasional echoes of James Joyce and more than a few touches of ‘blarney’. There are some engagingly comic gay sex scenes, although one of them ends in fatality. An abortion scene makes for a tough read.

Eamon Somers is a member of my Gay Authors Workshop. He has published Dolly Considine’s Hotel through ‘crowd-funding’ with Unbound. I look forward to seeing what he does next. 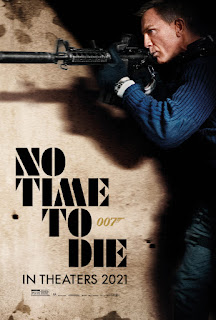 NO TIME TO DIE

So – was it worth the 18-month wait? No Time To Die is very much a sequel to Spectre but it also comes with echoes of several other Bonds, including the Lazenby one and You Only Live Twice, which had the creepiest Blofeld (Donald Pleasence).

No Time To Die starts like a Jason Bourne, with our hero enjoying a Caribbean retire-ment with his latest and possibly greatest lady-love, Madeleine (Lea Seydoux), who like James has childhood emotional scars. Bond’s old CIA chum Felix Leiter (who’s been played by almost as many actors as 007 and survived death and amputation) sets him back on the trail of SPECTRE. A visit to Vesper’s grave in Matera, southern Italy (where Mel Gibson filmed his crucifixion movie), pits Bond against a fresh bunch of killers.

The chase is back on. Blofeld (Christoph Waltz gets little more than a cameo) is in jail in England, but there’s a new criminal mastermind at large, Safin (Rami Malek with some Phantom of the Opera scars), who’s got his hands on a killer virus (here’s an echo of On Her Majesty’s Secret Service). To say any more would start me on Spoilers.

I hate to say this, but like Connery and Moore, Daniel Craig has ended up showing his age and his weariness with the franchise, although he still cuts the mustard in both the fights and love scenes. Ralph Fiennes looks a bit bored as M. Ben Wishaw gets good screen time as Q, but Miss Moneypenny (Noamie Harris) has been short-changed by the scriptwriters.

At two and three-quarter hours, this is the longest Bond – too long by at least those 45 minutes. The plot is a bit of a mish-mash, and there are some daft CGI gadgets (not quite as daft as the invisible car, but close enough). After all the movies in which 007 has been pitted against Ernst Stavro Blofeld, Safin rather makes him redundant here. In the repetitive shoot-out sequences Bond kills someone with every shot while the enemies always miss. This ‘superhero’ 007 is somewhat out of kilter with the romantically vulnerable Bond, which has been – and still is – the best element of Daniel Craig’s stewardship of the role.

The hallmark of Craig’s movies has been the combi-nation of  spectacular set pieces and elegiac climaxes, and this one very much delivers both of those elements. What next, and who next? I guess we must once more wait and see. To answer my opening question: Yes, No Time To Die was worth waiting for.