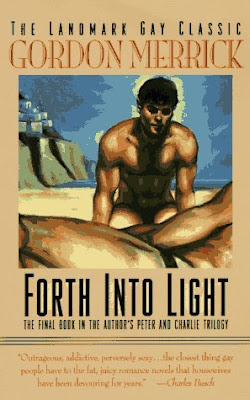 Gordon Merrick: FORTH INTO LIGHT

Originally published in 1974, this concludes the gay trilogy that began with The Lord Won’t Mind. Painter Charlie and art-dealer Peter are spending another summer in their Greek island villa with Martha, by whom they have each fathered a child. Martha is not the only woman in their life: art historian Judy arrives to consult Peter about some paintings that may be fakes. She inspires a heterosexual hiccup in Peter.

The paintings have been bought by celebrated New York author Mike who is on the island visiting his friend George, a not-so-celebrated author with a drinking problem and a rocky marriage. George’s teenage son Jeff thinks he may be gay and develops crushes on Mike and our two heroes (and one of the natives).

Aside from the sex, which comes close to the “classic” turgidity of the Song of the Loon trilogy, the book consists of long – even tedious – conversations about love and fidelity. There’s a “MacGuffin” involving a missing wad of dollars which, with the extended dialogue, has echoes of one of Terence Rattigan stodgier dramas. The debate about the “openness” of many gay relationships is an interesting one, to which Merrick makes a thoughtful contribution. Forth Into Light brings his ultra-erotic trilogy to an uneven climax (if I may use that word).