What I'm reading: dishing the dirt on Hollywood royalty (and ex-kings) 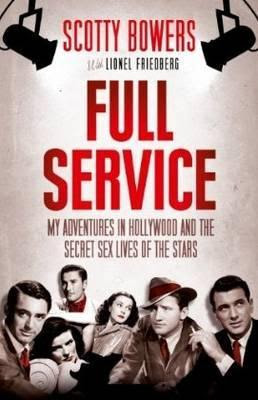 A farmboy from Illinois, Scotty Bowers headed for Los Angeles after his demob from the Marines at the end of World War Two (having seen some grim action in Guadalcanal and Iwo Jima). Working the evening shift at a gas station on Hollywood Boulevard, he was soon running a lucrative sideline as a "call-boy" (he calls it "tricking") with well-heeled Angelinos, most of them in the movie business - both men and women (he claims to prefer straight sex). As well as turning tricks himself, he also set up many another hard-up young man (or woman) with movie people great and small. Then as now on Sunset Strip, straight guys willingly turned gay tricks for a few dollars of beer money.

Many names here are familiar to the gay gossips: Noel Coward, Montgomery Clift, James Dean. I was only occasionally surprised by his revelations: moving on from deceased Hollywood 'royalty' to deposed royals, he says he bedded both the Duke and Duchess of Windsor and fixed Edward up with call-boys and Wallis with girls; 'Eddy' was "a damn good lover" (not according to Thelma Lady Furness, one of Eddy's earlier ladyfriends); and Wally "really knew what she was doing," said one of the call-girls. Wow. At a time when pornography was illegal in the US (hard to imagine, isn't it?) he arranged a private showing of ex-King Farouk's extensive personal collection for Dr Alfred Kinsey and his fellow researchers.

Not all the scandal is sexual: Rita Hayworth was too stingy to buy her out-of-work brother new tyres for his beat-up truck. And Scotty reminds us just how terrible was William Holden's decline (one of the non-gay clients) into the farther reaches of alcoholism.

Like the Collected Works of Kitty Kelley, Full Service is written (ghost-written in this case) in a gushing Louella Parsons prose style straight out of the "fanzines"; gushing enough to read at times like Barbara Cartland (who would churn in her urn at the comparison, I'm sure). I feel slightly ashamed to have wasted a few hours reading this tawdry drivel, but - oh dear - it's an undeniably compelling read. That said, I did find myself wondering how much of it is the sleazy truth and how much is money-minting fantasy.

Gay Authors Workshop in my garden 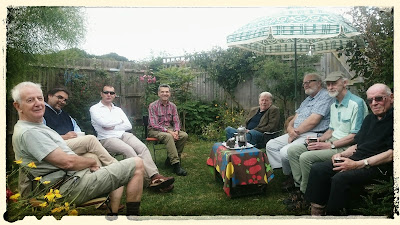 Gay Authors Workshop had a garden party in Newhaven (Sussex, not Connecticut!) on Saturday. The weather was kind to us.
Posted by David Gee at 02:44 No comments: