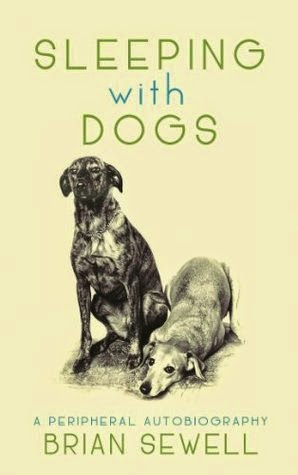 After two books in which he listed the (few) artists he admires and the (many) he despises, plus a blow-by-blowjob account of his busy sex life, 80-year-old art critic Brian Sewell now sets out to catalogue the dogs he has owned,  from boyhood up to his present great age: usually two or three at a time. Some were pedigree animals, some were cross-breeds, a few were mongrels. Most were rescued from re-homing centres; one he brought back from Turkey.

This is a short book (130 pages), each chapter encompassing the life of one or two of his beloved pets. The life and the death. Brian sticks with his dogs in health and in sickness, tenderly nursing them through injury, blindness, incontinence. Some of them he was forced to take to the vet to be euthanased but more often than not he cared for them to the very end. "The deaths of dogs grow more painful the more we experience them," he writes with poignant accuracy. Some of his dead dogs were buried in his or his mother's garden; a few were dug up and re-buried in another garden. Others were treated to a Tibetan 'sky burial' on the roof of his house. Mr Sewell, lord love him, is a bit weird.

He writes an elegant Edwardian prose, dense with commas and subordinate clauses. He writes with a touching tenderness and a fierce passion. This is a man who has clearly loved his animals, loved them wantonly, lavishly and slavishly. Any committed animal-lover will not fail to weep and laugh with Brian as he bonds with - and inevitably parts with - dog after dog after dog.
Posted by David Gee at 03:21 No comments: