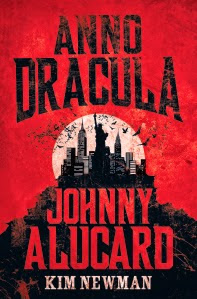 Yes, it's been done before: Dracula spelt backward. The fourth volume of Kim Newman's zany sequels to Bram Stoker's chronicle finds our undead hero finally (excuse the pun) out for the count. A perennially teenage Romanian upstart, Ion Popescu, 'turned' by Dracula in 1944, is brought to New York in the 1970s by vampire journalist Kate Reed and sets about becoming the kind of celebrity bloodsucker we know from the novels of Anne Rice. Moving to Hollywood, he becomes a film producer and adopts the name Alucard in honour of his Master.

This is the best of Newman's sequels to his original Anno Dracula (1992) in which Vlad Tepes became Queen Victoria's second consort in a London where vampires were the highest in high society. Similarly outlandish, Johnny Alucard is full of delicious historical and cinematic anomalies. Vampire Marlon Brando plays the count in Francis Ford Coppola's movie, relocated to the 1970s. In the 1980s Orson Welles is trying to get a version off the ground: Newman's mock screenplay is full of gags at the expense of Citizen Kane. A cult called Immortology pops up from time to time: no prizes for guessing who's being spoofed here.

Characters from Bram Stoker's novel are real people in this adaptation: Harker, Mina, Van Helsing. Fact and fiction are wittily interwoven. John Lennon was murdered (with a silver bullet) by Misery's Annie Wilkes. Newman's women are his best creations. As well as Kate Reed (undead since the Victorian era), 565-year-old 'elder' Genevieve Dieudonne returns from previous episodes. She now lives in a chrome Airstream trailer, whose eclectic furnishings include "a tacky Mexican crucifix with light-up eyes that she kept on show just to prove that she wasn't one of those vampires". Vampires have careers like other girls: Genevieve is a private detective in LA, and later a CSI in Baltimore.

Densely plotted with a Cecil B. De Mille-sized cast of extras, this richly inventive comedy makes the Vampire Lestat look like Thomas the Tank Engine. A fun read, well-written enough to be a good serious read.
Posted by David Gee at 04:02 No comments: