Wot I'm reading: Carry On up the colonies J.G. Farrell: THE SIEGE OF KRISHNAPUR

This novel won the Booker prize in 1973, so I'm a bit late catching up with it. Reading a novel set in colonial India recently made me remember a couple of 'imperial' works I'd missed out on. This is one; the other is The Raj Quartet, a somewhat bigger challenge, four volumes (I've watched the TV series three times, the best television drama of its time).

Mr Farrell sets his novel in 1857, the year of the Indian Mutiny, in the imaginary outpost of Krishnapur in the baking plains of Hindustan. Mr Hopkins, the 'Collector' (as the governor is called, because of his vast hoard of possessions), gets wind of the uprising and offers the expatriate community refuge in his Residency only hours ahead of the first assault by rebellious 'sepoys'. The expats are mostly the families of British soldiers, a few merchants and the managers of the opium farms. There are more women than men: the so-called 'fishing fleet', spinsters from England hoping to find husbands in the Imperial Army. The early chapters of this book are reminiscent of Jane Austen, a 'comedy of manners' moved to a dusty Indian outpost. Even as the bullets start to fly and putrefaction becomes the odour of the day, these ladies fret about the protocol of sheltering with people of lower class and looser morals. 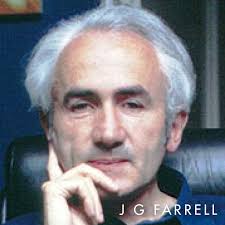 As well as Miss Austen, I occasionally caught a flavour of Carry On Up the Khyber, so inept are the British soldiers and so hapless the women cowering in the Residency. During the siege the last desperate cannon shot is loaded with cutlery, marbles and even a set of dentures. The characters are well-drawn but their eccentricity gives many of them the sheen of caricatures. The Magistrate - who "had the red hair and ginger whiskers of the born atheist" - is an avid student of phrenology. The Collector has a vast hoard of souvenirs from the Great Exhibition; he also collects grim statistics about death and disease. Hari, the Maharajah's son, comes across like a Peter Sellers impersonation. These people engage the reader's mind more than his heart; I found none of them especially sympathetic and was not deeply involved in their fate, certainly not in the way I was in The Far Pavilions, still and by far my favourite novel from the annals of Empire. Humour, even grim humour, sits uncomfortably with cholera and starvation as The Siege of Krishnapur reaches its climax.

I can't remember what I was reading in 1973 - not J.G. Farrell, obviously! - but this is a strange book to be regarded as the best of its year. Iris Murdoch and Beryl Bainbridge were on the shortlist, so the judges (who included Mary McCarthy and Edna O'Brien) must have seen something in The Seige of Krishnapur which I did not. To me it seemed leaden and repetitious; had it not been a prizewinning novel I would have given up on it and missed the rather splendid conclusion. Not the first time I've found an award-winning book (or play or movie) totally at odds with my reading(/viewing) preferences. I hope this doesn't make me a philistine!
Posted by David Gee at 02:57 No comments: