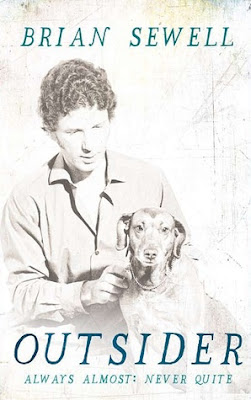 In the first chapter of this memoir (2011) Brian Sewell reveals that, seeing Aladdin as a teenager gave him 'an undying ambition, never fulfilled, to play the Widow Twanky.' With his highly affected speech Brian’s Twanky would surely have sounded like Edith Evans’s Lady Bracknell. When you read Alan Bennett’s diaries it’s easy to hear his Yorkshire vowels in your head. Mr Sewell similarly writes as he speaks: a plummy, precious, over-elaborate prose. In the early chapters of his memoir he describes his early life – mother, father, stepfather, schoolfriends – with the same clinical brutality with which he will later appraise artists and their work.

One of his tutors as a student of art history at the Courtauld Institute was Anthony Blunt, the ‘Fourth Man’ in the Cambridge Spy Ring. You feel his passion, inspired by Blunt, for Poussin above all other painters. Paint, rather than blood, runs in Sewell’s veins: he recalls in vivid detail the paintings he saw on a Grand Tour of Italy with five fellow students in an old Vauxhall in the 1950s. The detail of his studies – in these long Victorian paragraphs – and his subsequent career as a cataloguer and appraiser with Christie’s becomes wearisome after a time.

Arguments over attribution are only a little bit exciting, although Alan Bennett gave them an extra ‘frisson’ in his play about Blunt, set mostly in the Queen’s art gallery. Outsider offers a few moments of high drama in the auction rooms. In the 50s and 60s many great paintings and drawings sold for a fraction of what they are worth today. His rarefied view of art – and of his own importance – seem designed to make the rest of us (‘outsiders’!) feel like philistines; I certainly did.

Having been both Catholic and Anglican, Sewell is content to call himself an ‘an agnostic Christian,’ a label I relished and am tempted to borrow. After years in the bosom of Christianity – he flirted with the attractions of the priesthood – Brian surrendered to the temptations of the flesh. A period of gay promiscuity and occasional love affairs ensued, but he describes his lovers with less intensity than he gives to a Burne-Jones painting needing emergency repairs before its sale at Christie’s. At the end he offers a bizarre apology for having used ‘bugger’ rather than the F-word throughout his book. I would have preferred an apology for his Dickensian syntax.

He is generous with praise for the people in the art world he liked and equally generous with disdain for those he didn’t: a lot of old scores are settled in this cavalcade of tantrums, which often reminded me of Kenneth Williams’s acid-queen diaries. This is a mean-spirited autobiography, only enlivened by the occasional titbit of gossip and revelation. When Anthony Blunt is unmasked as a spy, a traitor, Sewell refers to this in passing with no suggestion that he shared the Establishment’s sense of betrayal. Presumably he goes into the scandal in more detail in the second volume of his memoirs, which I will steel myself to read sometime in the not-too-near future.
Posted by David Gee at 03:26 3 comments: