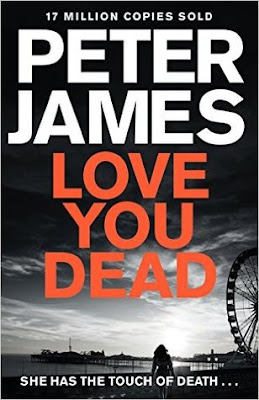 Brighton police super-intendent Roy Grace is having a busy month. The suspect from his last case, a serial killer, is on the run. There’s a string of car thefts and burglaries from the city’s poshest area. He has a new baby at home and his missing first wife has just been located in harrowing circumstances.

One of the burglars breaks into Jodie Bentley’s house in Roedean and dies from a snake bite. Jodie is a sociopath: she keeps snakes and other deadly creatures to help her bump off the rich old geezers she meets on dating sites. She marries them and kills them on honeymoon! Unluckily for this ‘Black Widow’, one of her victims works for the Mob, so when she returns to Brighton with 200 grand of looted money and a memory stick, there’s a hitman on her trail. Another worry for Superintendent Grace.

Peter James is Sussex’s best-selling author, a bigger seller than Henry James or E.F. Benson (the Mapp and Lucia books) and possibly even Rudyard Kipling, the three most famous authors to have lived in Sussex. Sussex is where I was born and the county I have returned to in my dotage. Brighton Rock is the most celebrated ‘noir’ novel set in Brighton (Graham Greene only stayed here while he wrote it).

Love You Dead is more 'naff' than 'noir'. Peter James is not a disciple of Greene, nor of that other noted James - Henry. If he’s a disciple of anyone, it must be Jackie Collins. Jodie Bentley is a campy creation who belongs in the pages of one of Jackie’s Hollywood Gothic sagas. James’s plotting, like hers, stretches credibility to breaking point, but (I concede this through gritted teeth) it does keep you turning the page. He writes, as she did, in short chapters with cliff-hanger endings His prose has a scarily similar sledgehammer subtlety: "She turned his face towards hers. He stared dead ahead. Unblinking. Nobody home.”


This is the first Peter James novel I’ve read. It will probably be the last. Brighton schlock.
Posted by David Gee at 04:30 1 comment: