Theatre at the cinema: New York in the 'Plague' years

This was more than Part One in every sense of the word. Longer (4 hours 20 minutes) and considerably louder but covering very much the same ground. As the gay Mormon torn between his neurotic wife and (equally neurotic) boyfriend, Russell Tovey holds his own against the competition from Andrew Garfield and Nathan Lane in considerably showier roles, as do Susan Brown in the role (one of several she plays) of the ghost of Ethel Rosenberg and Amanda Lawrence as the Mormon mom who 'adopts' Garfield in the hospital Aids ward (she also has multiple roles).

Nathan Lane has a protracted death scene which is both comic and tragic. Garfield looks like a latter-day Greta Garbo much of the time. He has several more scenes with the Angel who has told him he is to be a 'Prophet': the theme is central to the play but this kind of New Age mysticism (whoops, I nearly said 'claptrap') tends to get on my nerves. Good as the play is, brilliantly acted and thrillingly presented in this production from the National Theatre, I felt that Less might be More (the TV version 'condensed' the two plays into five-and-a-bit hours), but there's no denying what a powerful picture it presents of America during the Reagan years, the 'Plague' years.

This is a one-of-a-kind play: long, shouty, vehemently anti-Establishment - but dazzling.

There will be be ‘encore’ showings of both Parts in cinemas next month. Challenging theatre but highly recommended.


I didn’t see this award-winning play when it was first performed in the 1990s. This new production from London’s National Theatre was screened live in cinemas this week, with Part Two showing next Thursday. The play revisits the 1980s, when New York gay men were dying in frightening numbers from Aids and the Reagan administration was trying hard to look the other way.

The play is weirdly structured, a mixture of domestic drama, anti-Republican satire and New Age pseudo-spiritualism. The central drama is the relationship between Prior Walter (Andrew Garfield), a gay man with Aids, and his lover Louis (James McArdle). Then there’s the collapsing marriage between Joseph (Russell Tovey), a repressed gay Mormon from Utah, and his neurotic wife Harper (Denise Gough). Joseph is a protégé of real-life New York attorney Roy M. Cohn (Nathan Lane), who didn’t consider himself to be gay – he was a heterosexual who had sex with men! – and claimed to be suffering from liver cancer rather than Aids.

Andrew Garfield shows he is as good onstage as he is onscreen in a blistering performance, including a memorable drag-scene in the style of Norma Desmond. Nathan Lane converts his gloriously OTT character from The Producers into an odious but somehow pitiable loudmouthed Roy Cohn. Russell Tovey’s Joseph is much less showy but very persuasive. Nearly all the cast play multiple roles, including gender-crossing parts by Denise Gough and Amanda Lawrence.

This is a tough play about a tough time for New Yorkers. There’s a lot of shouting, a barrage of f-words and even some simulated gay sex. At three-and-a-half hours (with four-and-a-quarter more to come in Part Two) this is a long play, funny, sad, crude, occasionally tiresome (too many hallucinations for my taste), but viscerally enthralling.
Posted by David Gee at 06:39 No comments:

Wot I'm reading: Bosch is back 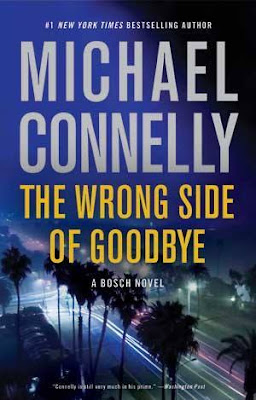 THE WRONG SIDE OF GOODBYE

It’s a long time since I read a book in just three days, but this one was hard to put down – like pretty well all the previous Harry Bosch tales (this is number 21). Harry has had a sour parting from the LAPD and is now attached part-time to the San Fernando Police Depart-ment, investigating a serial rapist who the profilers expect to morph into a serial killer. Harry also does some private work and is hired by a dying billionaire to find the child he thinks he fathered decades ago, who if he/she exists will inherit his vast fortune.


Neither of these cases is unduly complex but Michael Connelly’s great gift is to make the painstaking follow-up of clues and leads intensely fascinating. He always describes the routes Bosch takes criss-crossing the freeways of Greater Los Angeles: after 21 books I feel I could easily find my way around the city! Like Stephen King (and Charles Dickens – we’re in a great tradition here), Connelly fleshes out even minor players into fully rounded characters, and he also manages, in every book, to spring a last-minute surprise to Bosch’s investigations – two surprises here.

Mickey Haller, the ‘Lincoln Lawyer’ and Harry’s half-brother, makes a guest appearance, and the paperback ends with the first 40 pages of Connelly’s next book which will introduce an ambitious new female detective to the LAPD. Can we wait? We have to!
Posted by David Gee at 03:12 No comments: 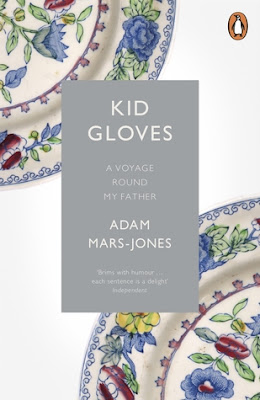 Subtitled ‘A Voyage Round My Father’ (borrowing from John Mortimer’s memorable biography), this is a subtle and charming memoir from one of Britain’s leading gay writers. William Mars-Jones was a Queens Counsel, a Knight and a High Court Judge. As a father he was somewhat Victorian, not touchy-feely like today’s dads (up to and including Prince William), not noted for humour, more generous with criticism than praise. He was also homo-phobic, making him a less than ideal parent for Adam. The process by which he came to terms with his son’s homosexuality was a slow one, helped to a considerable degree by the onset of dementia. Ironically it was the gay son who offered the most support during the judge’s long decline.

Adam takes us through the highlights of his father’s illustrious career, but it is the family ‘saga’ that provides the most engrossing element of the book. Some of the peripheral characters are wonderfully presented: the agency carers, lawyers great and small, and Adam’s lovers (odd that he makes them peripheral to his memoir) – one of whom died of Aids at 26.

William’s wife, Sheila, died before him, of a grim cancer. She died at home, in a separate bedroom from her husband to spare him, with his own health struggles, full exposure to her death. ‘She had uncoupled the marital train and left her husband behind in a siding,’ Adam writes in one of the book’s many memorable sentences. ‘It was kid gloves all round,’ he explains the title, ‘some of them elbow-length, in the debutante or drag-queen manner.’

The book is written with dry humour and a measured detachment, but the reader is always aware of the pain and the grief that have been the author’s frequent companions. His dad ought to be immensely proud of him.
Posted by David Gee at 06:40 1 comment: