Theatre at the cinema: Sour cocktail with a great taste 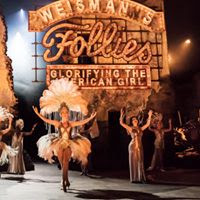 This was the latest West End show to come to a movie theater near me last night. I saw it in London in 1987 – twice – with Dolores Gray and then Eartha Kitt singing the show’s ‘anthem’ “I’m Still Here”. This new production goes back to Stephen Sondheim’s original vision: a single extended act and a character development study (wow – in a musical?) rather than a plot-driven drama.

A crumbling brick wall on a revolving stage creates the minimalist set, with a fire escape replacing the grand staircase down which the chorus girls would have paraded in the heyday of the Ziegfeld-style Follies decades earlier. At this 1970s reunion (the theatre is soon to be torn down) the focus is on two couples whose marriages have gone very stale: Sally and Buddy and Phyllis and Ben. Sally was in love with Ben (still is) but she married Buddy, who is a serial philanderer, as is Ben and also Phyllis. These four interact with their younger selves in crisp scenes and songs. If this show were a cocktail – and it very much is - it could only be a whisky sour. 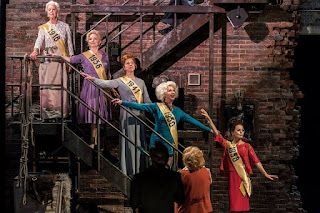 Follies makes a kind of 'companion piece' to Sond-heim’s earlier show Company, which took an equally cynical view of several marriages from the viewpoint of a ‘confirmed bachelor’ (the character wasn’t gay, although that was how gay men used to be referred to - PM Ted Heath for instance!). Some of the songs and production numbers in Follies are re-runs of pastiche vaudeville numbers with the players shadowed by and even dancing with their younger selves .

But it’s the bitterest lyrics – ‘torch songs’ - that stand out, show-casing failed relationships and the disappointments life dishes out. ‘Could I Leave You?’ is sung by Phyllis (Janie Dee who kept reminding me of Sigourney Weaver). ‘Losing My Mind’ is Sally’s big number – Imelda Staunton came into her own with this, though I felt she was underplaying the character in the first half of the show.

The absolute show-stopper (equivalent to ‘The Ladies Who Lunch’ in Company) is ‘I’m Still Here’ sung by retired stage siren Carlotta (Tracie Bennett). The best ever performance of the song, for me, was Carol Burnett’s in a concert version of Follies from the Lincoln Center in 1985. Shirley MacLaine sang it memorably in Postcards From the Edge, playing a character meant to be Debbie Reynolds. In this new production Tracie Bennett comes close to eclipsing everybody else. Ms Bennett memorably recreated Judy Garland on stage some years ago – a pity she won’t be in the next year’s new bio-pic (Renee Zell-weger). Much as Elaine Stritch lit up the stage with ‘Ladies Who Lunch’ in the 1972 Company, Tracie Bennett stole the show for me last night.

And what a show this is! Catch a repeat when they show an 'Encore' at your local multiplex.
Posted by David Gee at 07:03 No comments: 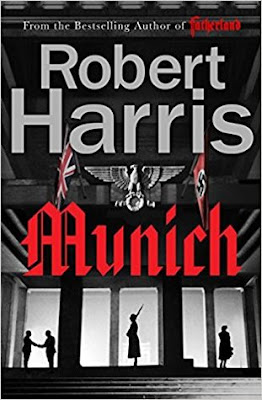 
A few years ago Robert Harris revisited the Dreyfus affair. Now he turns his attention to another ‘dodgy’ moment in history: Neville Chamberlain’s visit to Munich in September 1938 to attempt a watering-down of Adolf Hitler’s intended annexation of a large chunk of Czechoslovakia into the new German Reich. The only alternative to appease-ment is war, and after 10 million deaths in 1914-18, Britain and France are reluctant (and ill-prepared) to face another world war.

Much has been written about Munich. Harris injects a fictional element into history by planting a young traitor in Hitler’s Foreign Ministry who hands a secret document to a former university friend on Chamberlain’s staff, a document which may deter the British from doing a deal in Munich. Paul Hartmann, the traitor in Berlin, is a splendidly complex character: a patriot, proud of his country’s history and culture and deeply appalled that his country’s future is now in the hands of a power-crazed madman. I wonder if Harris will bring Hartmann – and Hugh Legat, his Downing Street friend - back in another story from the war years?

In Fatherland, his acclaimed first novel, Harris vividly and disturbingly created a Britain that had lost the war against the Nazis. The reader is perhaps expecting another rewrite of history here. The Munich scenes are highly dramatic. And what a cast of players! Hitler, whom one character remembers from a few years earlier as “this half-sinister, half-comical brawler and dreamer” who is now poised to turn the world upside-down. Mussolini, when he smiles, is “like a child’s drawing of a sun”. And Chamberlain, “a Messiah of Peace” with no personal charisma but a desperate commitment to postpone another war to end wars.

People are cheering in their gardens as the Prime Minister’s Lockheed aircraft climbs out of Heston aerodrome. The great optimism with which the mission to Munich was greeted by almost everyone in Britain (except Winston Churchill) reminds us that appeasement was welcomed in 1938, however disparagingly later historians have come to view.

Like John Le Carré (and like Graham Greene), Harris elevates the thriller to the class of Literature. His prose makes other best-selling writers look trite. This in the opening scene in the Ritz hotel restaurant: ‘He turned to find the maître d’, palms pressed together as if in prayer, grave with self-importance.’ A page later, with war seemingly inevitable, the author imagines: ‘The diners at the Ritz would abandon their white linen tablecloths to crouch in slit trenches in Green Park.’  Sorry, but you don’t get sentences of that calibre in Dan Brown.
Posted by David Gee at 07:07 No comments: