David at the movies: Creature Feature - enchanting but daft 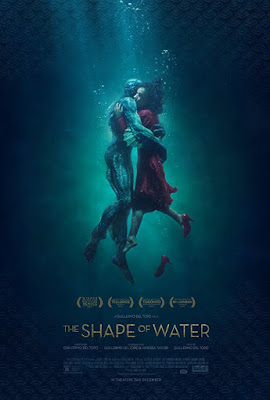 THE SHAPE OF WATER

Back in the 1950s we used to see sci-fi movies like The Qatermass Experiment and I Married a Monster from Outer Space, shot on desperately low budgets but satisfyingly scary for their time - and more than a little daft. The Shape of Water is a 'throwback' to that era, set in a mysterious US oceanographic facility in the 1960s. Sally Hawkins plays Elisa, a cleaner who takes pity on the exotic amphibious man brought to the facility from his home in the Amazon. Elisa is mute and knows what it’s like to feel an ‘outsider’. She feeds the Amphibian and teaches him sign language. And, of course, as the poster clearly signals, she falls in love with him.

Guillermo del Toro is not new to ‘creature features’ or, as he would prefer to call them, fairy tales for adults. There are some very adult scenes in this movie – a pity in a way since it excludes the younger audience who would be enchanted by it. The theme is not too far removed from Spielberg’s E.T. or Close Encounters with Elisa replacing the children captivated (captured, even) by aliens. Michael Shannon’s brutal facility chief is the equivalent of the Nazi bounty-hunters in an Indiana Jones adventure. There’s also a good-guy professor, and Elisa has a sassy sidekick in fellow cleaning-lady Olivia Spencer.

For all the wondrous CGI and make-up, the Creature is still visibly an actor (Doug Jones) wrapped in plastic. The budget was clearly awesome. I’m not sure that it really deserves to be getting all these Awards and Nominations. I couldn’t help remembering all those 1950s sci-fi horrors. Yes, it’s a beguiling fantasy romance but it’s also totally – epically – daft. 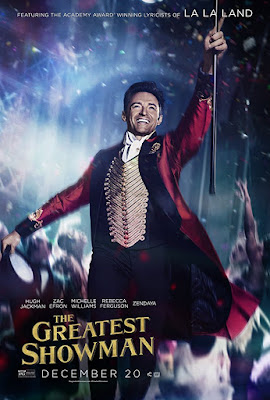 This musical extrava-ganza on the life of P.T. Barnum is pitched at the X-Factor audience, much as Moulin Rouge was a few years ago. Don’t expect to hear Hugh Jackman singing ‘Oh What a Beautiful Morning’ (which he has sung on-stage). It’s not that kind of show. The songs are loud, with repetitious lyrics, staged like pop videos. P.T. Barnum was a 19th-century showman, but this is a decidedly 21st-century show.


Zac Efron provides eye-candy for teenage viewers, but the movie totally belongs to Jackman, sounding better than he did in Les Mis and dancing like an Olympic gymnast. Political correctness has diluted the ‘freak show’ with which Barnum begins his circus career – there’s a bearded lady (with a fine belting voice), Tom Thumb and dancing Siamese twins, even a 'Wolf Boy', but nothing as grotesque as the Elephant Man, who, with other tragically deformed people, provided the ‘lure’ for punters into Barnum’s circus.

This is not my idea of what a musical should be, but it’s dazzlingly staged and performed with great exuberance and – somewhat against my better judgement – I enjoyed it! 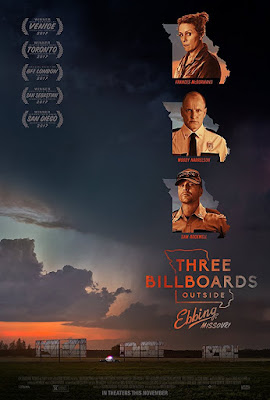 The weirdest title of the year and heavily tipped for Oscars, having already won Best Picture at the Golden Globes. Frances McDormand is Mildred, the small-town mom whose daughter was raped and murdered almost a year ago. She thinks the chief of Police (Woody Harrelson) has not tried hard enough to find her daughter’s killer and pays for three huge billboard posters to remind him (and the townsfolk) of what she sees as a dereliction of duty. Some of the deputies, notably Dixon (Sam Rockwell) are bigoted bullies, but Chief Willoughby is a decent man, dying a slow death from cancer and keenly aware that a crime has gone unsolved.

Rape, murder, cancer (and arson) – this movie pulls no punches. The billboards encourage a violent response and, as we know, violence begets violence. All the performances are gut-wrenchingly good, especially McDormand who wears her grief like an ever-present shroud. The frequent shifts of tone from tragedy to comedy are brilliantly scripted. If I have one negative reaction it’s my usual one to the relentless use of f-words (and even the c-word, although this is amusingly exchanged in one kitchen table scene between Mildred and her rebellious teenage son).

A tough movie to watch, but a good one – even a great one. I’ll be surprised if McDormand doesn’t beat Meryl Streep to the podium at this year’s Academy Awards. Mildred is one of those characters who will stay with you long after you leave the cinema.
Posted by David Gee at 03:32 No comments: