David at the movies: An Oscar for this Wilde movie? 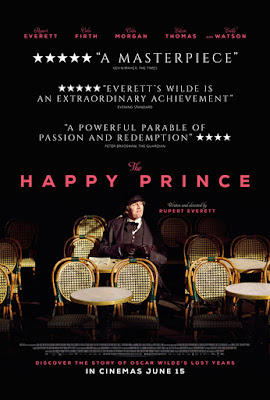 Rupert Everett spent ten years getting the finance for this biopic of Oscar Wilde’s last years, which he has scripted and directed as well as reprising his stage role as the ‘martyred’ Victorian playwright. The result is a triumph of writing, direction and performance. There have been three excellent previous screen versions of Wilde’s fall from grace, but The Happy Prince outshines them all.

Pre- and post-Fall are interwoven. Oscar tells ‘The Happy Prince’, his dark (Grimm) fairy story, to his children in flashbacks from Paris, where he also tells it to a couple of street kids who have become the children of his exile although the older brother is also his rent-boy. Bloated and dishevelled, the old Oscar still has the appetites which sent him to prison. And he still loves Lord Alfred Douglas, who joins Oscar in a villa in Naples (with more rent-boys) in Naples for a few bickering months. Robbie Ross (Edwin Turner) and Reggie Turner (Colin Firth) are the last London friends who offer loyalty and handouts.

Everett’s Wilde is as poignant as Stephen Fry’s but even more pitiable as poverty and ill-health overcome him. Colin Morgan gives ‘Bosie’ his prettiest incarnation since John Fraser in 1960. Emily Watson shines in brief scenes as Oscar’s wife Constance, also forced into exile by his disgrace. Tom Wilkinson contributes a vivid cameo as the priest brought to Oscar’s hotel deathbed. The famous lines about the wallpaper and ‘dying beyond my means’ are not forgotten; and Everett has scripted a few one-liners Oscar would happily steal the credit for.

The final scenes almost certainly take liberties with the facts, but they add an operatic grandeur to the 'Last Act'. Rupert Everett’s long struggle to realise this project is a splendid homage to the tragedy of the 'comeback' that was Wilde's greatest drama, his greatest tragedy. The movie deserves to be garlanded with awards: an Oscar for Oscar! 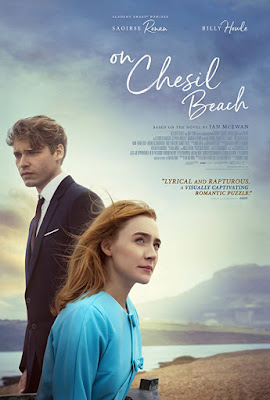 I was never a big fan of Ian McEwan’s novel, which seemed to me a bit slight. The movie version has more meat on its bones, but at its core is the same dilemma: a middle-class couple in their twenties who are ill-prepared for the  ‘consummation’ of their marriage in 1962 – five years before the "Summer of Love".

Most of the film happens on the day of the wedding. Alone in their room in a Dorset hotel, deeply in love but both sexually inexperienced, Florence and Edward (their names, like their story, belong to an earlier era than the 1960s) slowly move towards the Moment. We see their courtship in flashbacks. They met as newly graduated students. Florence (Saoirse Ronan) is a talented violinist. Edward (Billy Howle) is a nerdy historian. Her parents (Emily Watson and Samuel West) are stuck-up snobs. His family are more appealing, although his mother (Anne-Marie Duff) shows bizarre behaviour following a head injury.

The ‘consummation’ which goes so clumsily wrong must surely be something which has happened to many couples in times both ancient and modern. The movie has a coda in 2007 that shows how their lives have progressed since that disastrous evening.

The performances are extraordinarily good. Saoirse Ronan gives Florence a nervous intensity that is spot-on for the character. Billy Howle has the right look and the right awkwardness. The parents, nice and awful, are all perfect. The cinematography is lovely. The music uses some appropriately ironic pop songs from the 60s. McEwan’s script expands his novel with humour as well as pathos.

For me there is still a problem with the fact that one moment of ‘sexual clumsiness’ could have such a lasting impact. That said, there was a girl I knew at university (also in 1962) who – would not thank me for publicising her hang-ups.
Posted by David Gee at 04:33 No comments: 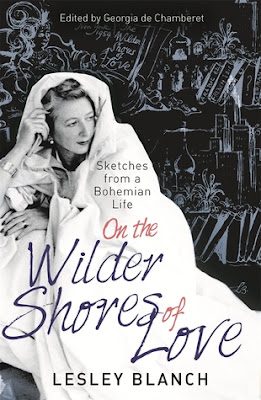 LESLEY BLANCH: On the Wilder Shores of Love

Lesley Blanch, who died at the age of 103 in 2007, must be the very last of the great Bohemians. She wrote about fashion and interior design for Vogue and published books celebrating her passion for Russia and the Balkans. This new compilation has been put together by her god-daughter and includes some of Blanch’s travel writing, a retrospective memoir of her Edwardian childhood and (previously published only in French) the story of her marriage to the Russian-French soldier-diplomat and writer Romain Gary.

Her god-daughter calls her “a Sheherezade figure”. Blanch romanticises in vivid detail her girlhood in the years leading up to World War One. She had a baby by an Italian soldier, gave it up for adoption and never mentions it again. I couldn’t decide whether she was heartbroken or heartless. Her first teenage impression of Florence was that it was “forbidding”; Venice was “draughty”.

Blanch’s style, very much trapped in the era between the wars, is often as indigestibly rich as Lawrence Durrell and occasionally as suffocatingly gushing as Barabara Cartland. I was also reminded of Gore Vidal. Like Gore, Lesley must have been a fabulous guest at a dinner party: a colourful talker but not perhaps a great listener. Her writing suggests a monstrous ego at work (Vidal again!) She had a prodigious memory but what she recalls in the most vivid detail are people’s homes and “collectables”. The portrait of her marriage is disappointing: she refers to Gary’s “amorous conquests” (he was a serial adulterer) without going into details and draws a veil over her own infidelities.

I was gifted this book and would not have read it otherwise. Lesley Blanch “lived a life of high intensity on many a wilder shore” (her god-daughter’s words). There is a lot to like, even to admire, in this recollection of a peripatetic life that spanned the entire twentieth century, but its author, I suspect, was not a likeable woman.
Posted by David Gee at 22:50 No comments: