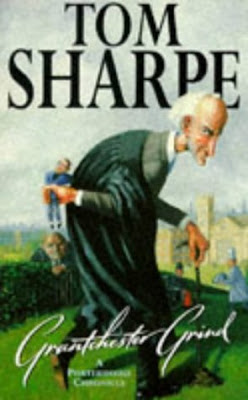 It’s a big disappointment when a favourite writer produces a dud. Tom Sharpe, who died in 2013, was a great comic novelist, from his wicked Apartheid-era South African satires through to hilarious caricatures of the British establishment in Blott on the Landscape and Porterhouse Blue, both of which made hysterically funny TV series. I only recently discovered that I’d missed Grantchester Grind, a sequel to Porterhouse Blue, and decided to catch up on it.

I wish I hadn’t bothered. The humour here is very dry and barely raised the occasional chuckle. Porterhouse College needs to pay for a new roof to the Chapel and unwisely allows a philanthropic American media mogul to invest. Apart from a set-piece scene where some of the chapel ceiling falls on the congregation, most of the first 150 pages is taken is taken up with dialogue between the conservative College administrators and the deeply philistine American team. Both sides are liberal in the use of the F-word, giving this book the sledge-hammer impact of today's stand-up comedians who think foul language is intrinsically funny.

It is not. I can’t tell you if the following 350 pages get better, because I gave up. I hate to give up on a book, any book, but this one defeated me. Leaden and dull. Maybe Mr Sharpe was just going through a bad patch. After this he wrote several more novels, including another Wilt trilogy (Wilt was not my favourite Sharpe character). But for me Sharpe has joined the ranks of authors I had to stop reading. Iris Murdoch went very tedious in her later books (perhaps because of dementia stalking her), and I lost faith in Anthony Burgess and Gore Vidal, two of my all-time favourites. Lower down the literary food chain I long ago stopped reading Jackie Collins, who was never as good as Harold Robbins. Stephen King still delivers the goods, but Anne Rice, for me, does not.
Posted by David Gee at 03:40 No comments:

David at the Theatre: Anna and the King of Siam 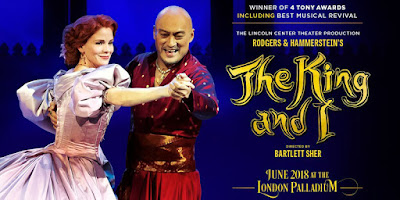 Rodgers and Hammerstein’s Siamese musical has been entrancing theatre (and cinema) audience since 1951, when it starred Yul Brynner and Gertrude Lawrence. This latest production at the London Palladium is a transfer of the 1915/16 New York show with most of its American cast onboard. Kelli O’Hara sounds just as divinely British as Gertie did or Deborah Kerr in the movie (with her singing dubbed by Marnie Nixon) – Ms O’Hara has an operatic range and needs no dubbing. Ken Watanabe is the King, with a ‘singing’ voice no stronger than Yul Brynner’s but very much the same on-stage 'presence'.

The story is a bit crisper than the movie’s, but the plot is unchanged, divided between the governess’s rebellious relationship with the king and the concubine’s star-crossed love story. All your favourite songs are here, gloriously well sung, and the kids (presumably there are several groups alternating performances) are as captivating as they were in the movie and all other stage productions. The palace set is pleasingly simple, but the opening scene – a steamer sailing onto the stage – is as thrilling as any Lloyd Webber blockbuster.

This is a splendid production of a joyous musical. There’s just time to catch it before it closes at the end of September.
Posted by David Gee at 06:17 1 comment: