David at the movies: a gay 'bromance'? 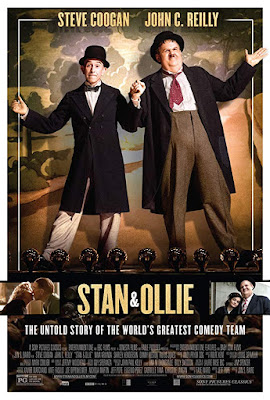 Never a fan of Laurel and Hardy (didn’t like Norman Wisdom either; slapstick comedy doesn’t push my buttons), I wasn’t expecting to enjoy Stan & Ollie. But - a nice surprise - I was totally charmed by it.

After a Prologue showing the making of one of the movies of their Hollywood heyday, the story jumps to the 1950s when, thanks mainly to television, comedy has moved on from their kind of humour. They come to England for a tour of provincial theatres. Ollie (John C. Reilly) is overweight and overdue for a stroke. Stan (Steve Coogan) is struggling to come up with new material. Luckily for them, their fans are still happy to pay to see the same old pratfalls and clunky one-liners.

Coogan and Reilly are pitch-perfect as the two old hams; no-one could have played them better. Shirley Henderson and Nina Arlanda are terrific as their wives: Lucille (Henderson) watches Ollie’s drinking like a hawk; Ida (Arlanda) loves to talk about the acting career she never really had before marrying Stan. There could almost be another movie about the lives of the wives.

Laurel and Hardy bicker like the old married couple they sort of are; they come close to falling out. Their act – especially the dance routines – was quite camp for its time, but there’s nothing here to suggest a gay relationship (something of a relief after this year’s early crop of lesbian rustling under the bedcovers!).

Stan & Ollie wears its heart on its sleeve – an affectionate tribute, beautifully written, splendidly directed and magnificently played, to a comedy duo who were deservedly loved by millions for a few decades in the mid-twentieth century. A joy from start to finish. 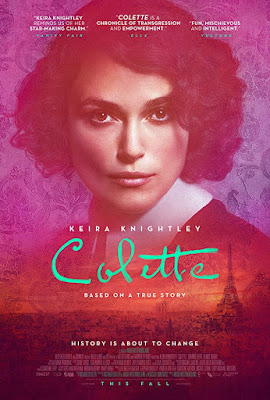 
We mainly know Colette as the author of the book on which the much-loved movie Gigi was based, but before that she was a literary superstar in France and beyond as the author of the mega-selling Claudine series of saucy novels, which were to early 20th-century France what Fifty Shades of Gray has been to the new millennium.

Her husband Willy Gauthier-Villars, a gambler and womanizer, originally published the first Claudine episode under his own name, although Wikipedia tells us he almost certainly employed a ghost-writer. The next ‘ghost’ was his teenage bride who battled in the courts to get herself credited as the books’ author.

The new movie dramatises, with a few necessary liberties, this battle. It also dramatises their marriage, how freely I’m not sure. Colette (Keira Knightley) is initially happy with her husband (Dominic West) and seemingly very happy with their energetic sex-life, but then she falls in love with an American millionaire’s gold-digging wife (Poldark’s Eleanor Tomlinson). Later she becomes the great love of Paris’s most in-your-face butch bitch, Missy (Denise Gough). Colette’s affairs are reproduced in the Claudine books, making her a scandalous success in society as well as book sales.

Plot-wise, the movie has to build a mountain out of a series of mole-hills, the moles being Collette and Willy’s frequent changes of partners. Unlike this winter’s other lesbian love-fest The Favourite, with its bawdy comic overtone, Colette is played very straight (ahem), so it’s not quite so much fun. Bravura performances all round. Sumptuous cinematography beautifully recreates Belle Epoque Paris, and with gorgeous frocks and throbbing sex scenes the movie is definitely a feast for the senses. 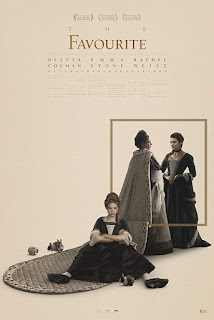 
It’s the early 1700s. England’s war with France is not going well, and the Queen is playing with her rabbits. She has 17 rabbits, in memory of the 17 children she lost or miscarried. When she’s not playing with rabbits, Queen Anne (Olivia Colman), gouty and doughty, is playing with her latest squeeze, Sarah Duchess of Marlborough (Rachel Weisz).

Yes, dear fellow citizens of the realm, our sometime sovereign lady Queen Anne was a "friend of Dusty" (long before Dusty). There is (Wikipedia) historical evidence (mostly letters) of a whole series of attachments to ladies of the court. In the movie Sarah’s cousin Abigail (Emma Stone) inveigles her way into the palace and, surprisingly soon, into the Queen’s bedchamber. The feud for Anne’s affections has ramifications in Parliament as well as in the palace.

There are some lesbian scenes here, plus a small amount of heterosexual sex in the movie – played for laughs – and a large amount of swearing, with liberal use of both F-word and C-word. The somewhat camp vulgarity and the brisk pace of the narrative will have reminded many in the audience of the Carry-On comedies. I was more reminded of The Madness of King George, Alan Bennett’s royal Regency romp, which wore its lese-majesty with a similarly brazen air of triumph.

The acting by the three female stars is nothing less than glorious. The male cast members are also outstanding in more ways than one. There are some weird camera angles which I found distracting and some of the music score is painful to hear, but this is another right-royal romp, tragi-comic with a bias towards comedy, not quite as enjoyable as Mr Bennett’s, but a splendid visual feast.
Posted by David Gee at 03:14 No comments: 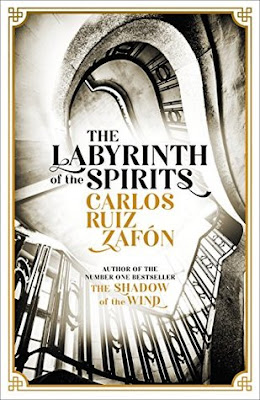 Carlos Ruiz Zafon: THE LABYRINTH OF THE SPIRITS

The Shadow of the Wind was one of those books that ‘blew me away’, much as John Fowles’s The Magus did in my teens and, much later, Salman Rushdie’s Shame and Isabel Allende’s The House of the Spirits. These were novels which seemed almost a reinvention of the storyteller’s art, taking fiction in new directions.

The Shadow of the Wind has become a quartet with the splendid overall title of The Cemetery of Forgotten Books. After 18 years the series concludes with The Labyrinth of the Spirits. This – 800 pages - has taken me much longer to read than the others. The ‘magic’ that drew readers in their millions to Shadow is still there, though perhaps a little diluted this time.

As well as continuing the story of Daniel and Bea Sempere, the Barcelona bookshop proprietors, and their larger-than-life friend Fermin in the 1950s and beyond, Labyrinth introduces a new heroine, Alicia Gris, physically and mentally scarred in Spain’s civil war and grimly pursuing Mauricio Valls, a minister in Franco’s regime who formerly directed a brutal prison for political dissidents. The monster Valls is kidnapped and treated to some overdue rough justice. Alicia has a hard time catching up with him.

Towards the end of the novel Zafon unveils his literary ‘alter ego’ whose mentor stresses the importance not only of writing but of re-writing. Ironically, this epic novel could have done with a bit more rewriting. Many scenes are very overwritten and some of the dialogue is larded with clunky humour that seems to be channelling Raymond Chandler or Mickey Spillane. But Zafon’s insightful way with words has not entirely deserted him: phrases like “the perfume of broken souls” fairly jump off the page.

This quartet is a magnificent achievement and its conclusion is sure to resonate with Zafon’s multinational legions of admirers. Salud y fuerza!
Posted by David Gee at 02:56 No comments:

with two other members of Gay Authors Workshop and Paradise Press. 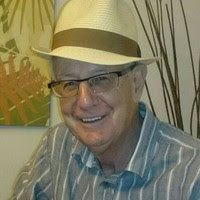