What I'm reading: 007 before Casino Royale 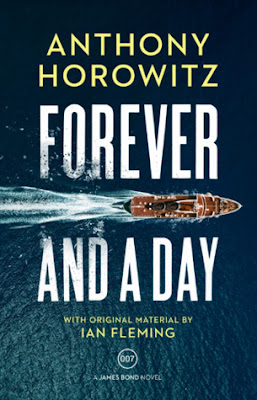 Anthony Horowitz: FOREVER AND A DAY

Anthony Horowitz contributed Trigger Mortis (daft title) to the 007 canon four years ago, which slotted into the chronology between Goldfinger and For Your Eyes Only. He now gets a second bite of the franchise cherry with Forever and a Day (not much better as a title, a bit Barbara Cartland), which is a prequel to Casino Royale, giving the 66-year series a new first chapter.

It begins with an echo of Daniel Craig’s cinema debut with M conferring on Bond, the new kid on the block, his ‘licence to kill’. This is the old pipe-smoking M, not the Judi Dench version. Our hero is then sent to the French Riviera to investigate the murder of his immediate predecessor, whose 007 handle he has chosen to inherit. On the Côte d’Azur Bond  encounters a CIA guy, a predecessor to Felix Leiter (who has been fed to the sharks more than once onscreen). He also meets an American billionaire who insists on calling him 'Jim' and a humongously fat Corsican gangster who could only be played by Marlon Brando or Orson Welles. And he meets a mysterious French beauty called Sixtine who seems to be playing two sides. Madame 16, as she’s also known, is a few years older than 007, but you get the feeling she will be bedded if not wedded in due course.

Like Ian Fleming, Horowitz lifts the sheet on the bed but doesn’t take us beneath it, so the erotic element is left to our imagination. (I always wished they had done this in the Roger Moore movies.) But he doesn’t skimp on the mayhem, and the adventure gathers plenty of momentum: a casino, a factory in the hills guarded like Fort Knox, a brand new cruise liner. The villains (more than one) get their just desserts, as we expect. The romance is one of those with an elegiac ending, paving the way for Bond to meet Vesper Lynd on his next assignment. Sixtine is a somewhat daft name, though not as daft as Pussy Galore (truly unforgivable, Ian, and only exceeded in awfulness by Plenty O’Toole in one of the films!).

Mr Horowitz perhaps does the best job of any of the inheritors of the mantle at capturing Fleming’s style: elegant prose with just the right amount of background, a seductive heroine, credible adversaries and slowly rising tension. The franchise is in safe hands.
Posted by David Gee at 03:45 No comments: 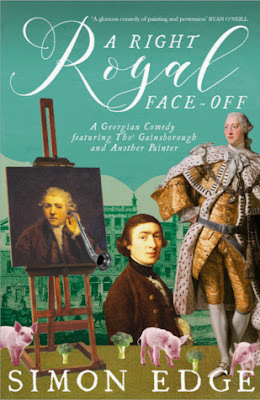 London in the 1770s, during the reign of George III (the ‘mad’ one). A boy from Suffolk starts a new job as footman to the curmudgeonly Thomas Gainsborough, regarded as the ‘second-greatest painter’ in the land. The greatest is Sir Joshua Reynolds, president of the Royal Academy, who is deaf as a post and who uses cheap pigments that are apt to change colour after a few weeks. The foot-man’s letters home to his mum chronicle the almighty rivalry between the two artists, both often commissioned to paint the same sitters – up to and including the King and his numerous offspring, plus rich courtiers and (richer) courtesans.

In a parallel modern story, a vandalized painting which may be a ‘lost’ Gainsborough turns up on ‘Britain’s Got Treasures’, a wicked parody of BBC’s ‘Antiques Road-show’ with some very close to recognizable ‘Experts’. The portrait will be critical to the show’s (and the experts’) survival – but who is it?

Both the Georgian story and its modern corollary are a joy to follow. Simon Edge has a delicious tongue-in-cheek humour that put me in mind of Alan Bennett (our national treasure) and the late great Tom Sharpe, who gave us the Wilt series and (inappropriate to be named alongside Thomas Gainsborough) Blott on the Land-scape. The footman’s voice is especially appealing: ‘Sir Joshua is a strange old gentleman with the complexion of a boiled beetroot.’ I enjoyed A Right Royal Face-Off more than anything else I’ve read this year.