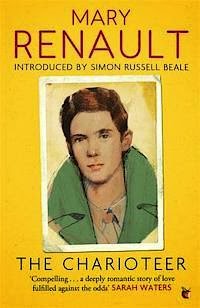 
My dog-eared 1959 paperback of this gay 'classic' has a startling front cover blurb: "Three men plunged into a struggle with their unnatural love." Probably not the pitch they're using in the current re-issue.

It's 1940. Laurie Odell has been repatriated with other wounded servicemen from Dunkirk. In a military hospital in the West Country he develops a crush on Andrew, a naive young conscientious objector consigned to ward orderly duties as an alternative to prison. At a louche party (men dancing with each other: quick, bring smelling salts!) Laurie is reunited with injured sailor Ralph, on whom he  had a crush at boarding school; Ralph was expelled from their school for misbehaviour that is only hinted at.

Rather a lot is only hinted at as, in the midst of war, a gay 'love-triangle' develops.There's a lot of talk and no 'action'. A single chaste kiss; a couple of sex-scenes that take place off the page (like those in Gone With the Wind and most novels of the '40s and '50s). The book's best chapter is the wedding when Laurie's mother's remarries, full of precision-honed awkwardness. Of the three men, Laurie is still firmly closeted; Ralph is 'out', at least to his friends; Andrew doesn't know enough to think of it as a closet.

Words like 'rent' and 'queen' and 'cottage' were already in use in the 1940s, although 'gay' is not used in the sense we have for it now. When Renault describes the room in which the party is taking place, the furnishings include 'various poufs', which clearly would be edited out if it was being written today.

Andre Gide is, of course, the Patron Saint of gay fiction, up there in the 'Pantheon' with Oscar and Aubrey. E.M Forster's Maurice, begun in 1913, would qualify to be the first gay novel of the modern era had Forster not lacked the cojones to publish it (it appeared in 1971, a year after his death). Christopher Isherwood's Berlin Stories (1945) are generally hailed as breaking new ground, although the homosexual element in the two novels is less explicit than it was in the movie of Cabaret (having been left out in the stage play). Gore Vidal pioneered modern gay fiction with The City and the Pillar (1948), a more provocative book than Truman Capote's Other Voices, Other Rooms (also 1948) which is exquisite but kind of precious.

The Charioteer, which first came out, so to speak, in 1953, is painfully slow, very dated and more than a little 'twee', similar in many respects to Forster's Edwardian-era  Maurice. Nevertheless (again like Maurice) it is an important and deeply felt novel about homosexual love. It was daring in its day and clearly sent out a plea for understanding and tolerance. The men in the story are living with the ever-present threat of what happened to Alan Turing: exposure, shame, arrest and the choice between imprisonment and chemical castration. And let's not forget, there are many countries today where gays and lesbians live with the threat of violence and execution. 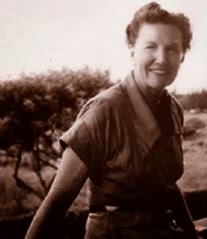 You can read up on Mary Renault (1905-83) on Wikipedia, as I just have. An English lesbian who relocated to South Africa with her lover, she is most remembered for a series of romanticized novels about the gay/bi warriors of ancient Greece. She declined to associate herself with the Gay Liberation movement, and yet her books made her one of the true 'champions' of our community in Britain and the US, We must continue to honour her memory.
Posted by David Gee at 10:36 No comments: