What I'm reading: how to start a gay revolution: quietly! 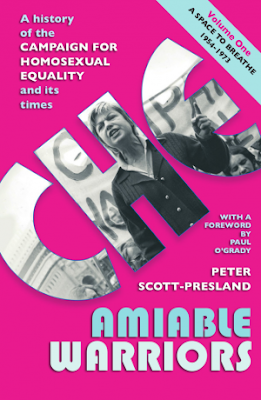 I must begin by admitting an interest. Amiable Warriors is published by Paradise Press, who also published my Bexhill Missile Crisis; Peter Scott-Presland and I meet at Paradise events and at London's Gay Authors Workshops.

This big fat book (500 pages, plus 100 pages of notes and index) is only the first third of a history of CHE, the Campaign for Homosexual Equality, a grassroots organisation that started in 1964 and grew to have over 5,000 members and 150 local groups. Unlike the more flamboyant Gay Liberation Front, who organised demonstrations and sit-ins and some provocative spectaculars, CHE concentrated their efforts at the 'parish' level: meetings in towns where few if any gay men and women had come out; writing letters to local and regional papers as well as to the national media and MPs.

We all know about Oscar Wilde. Some of us remember the Lord Montagu case (1953) and indecency charges over the years against John Gielgud and Rupert Croft-Cooke, among many others. Amiable Warriors also is full of 'smaller' scandals and arrests, many of which ended in imprisonment, even suicide. Peter Wildeblood, charged (and jailed) at the same time as Lord Montagu, wrote a landmark book, Against the Law: "I would be the first homosexual to tell what it felt like to be an exile in one's own country."

Attempts to implement the Wolfenden Committee's recommendation (in 1957) that homosexual acts be decriminalised were met by vehement opposition from the majority of MPs and churchmen: "a Buggers' Charter", they called it. The activists from CHE and other groups who faced down this prejudice were bold and brave, coming out at a time when coming out could unleash hate-mail and even excrement through your letterbox. A handful of MPs and a few peers (mostly heterosexuals in both cases) took up the cause, and finally, in 1967, the law was changed. Gay sex was now legal - for men over 21 and only in private homes: not in hotel rooms, public conveniences, houses in multiple occupation or the armed services (or where more than two people were involved).

But a change in the law did not guarantee the end of hostilities. The battle went on. At the national level, to lower the age of consent and blur the edges of the other restrictions. At the local level, there were battles against homophobic local councils and churches to licence venues where gay men could socialize, support each other and (shock, horror) even dance! Especially in the North CHE activists fought long and hard to foster toleration of the gay community. Their opponents, newspaper proprietors as well as politicians and churchmen, continued to see gay lib as opening the door to degeneracy and corruption, but in reality "what homosexuals wanted and needed was lifetime partnerships, and the purpose of law reform was to make these more possible." This, after almost fifty years, we finally now have.

Exhaustively researched, Amiable Warriors offers an encyclopaedic overview of CHE, its roots and its branches. Many branches got bogged down in arguments about rules and procedures - the bane of trade unions and even the Women's Institute! Potted biographies of key players in the history of CHE give Scott-Presland's book an almost Dickensian flavour. Paul O'Grady (who also writes an introduction) and Brian Sewell are part of this history; Mr Sewell was as acerbic a branch chairman as he was an art critic!

Watching celebrity gays like Graham Norton and Alan Carr and a few bold sportsmen in the public arena today, it's easy to forget what a long hard road it has been for homosexuals from being prosecuted and pilloried to acceptance and even admiration. At the age of 19 I left my Sussex hometown (population then over 5,000), still thinking I was "the only gay in the village", clearly a statistical improbability. Now, at the over-ripe age of 73, I am able to look forward to lurching down the aisle next year with the beloved companion of my last five years (after his divorce comes through).

But we must not forget that even in this country there are still men - and especially schoolchildren - who are too insecure to come out and be confronted by ostracism and bullying. And there are many countries where homosexuals face persecution up to and including public execution.