What I'm reading: Never too much of Mr Bennett 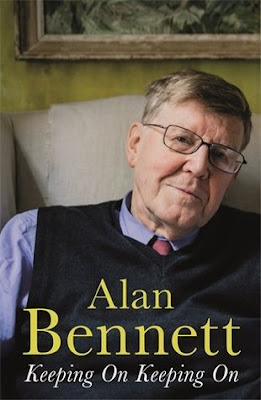 Having read the previous volumes of Mr Bennett’s Diaries, I put off reading this, thinking it was bound to be more of the same. Well, it is – and that’s what so joyful about it! His life is only a little bit grander than yours and mine – he and his partner shuttle by car and rail between their homes in Camden and Yorkshire (and an annual trip to a cottage in France). They take sandwiches on visits to beauty spots and country churches, they shop for antiques which usually require Rupert to do some restoration. Alan, of course, also does talks and readings and book-signings – and writes plays.

He supports causes close to his heart: keeping libraries open and schools open-minded are two of his great concerns. And he has bees in his bonnet: during the decade covered here, 2005-2015, the police kill an innocent Brazilian on the London Underground and never apologise. The British government colludes in the rendition of terror suspects. Tony Blair continues to pop up; Mr B despises him as powerfully as he did Lady T in a previous era. Nor is he a fan of David Cameron (“smart alec”), Richard Branson (“a bit of a pillock”) and Boris Johnson (“doesn’t seem to have a moral bone in his body”), among many others. He blames Classic FM and the National Trust for “the Torification of life” and deplores “the nastification of England” by property “improvers”. Waiting to go on a stage in West Yorkshire he is confronted by a pair of “sabre-toothed pensioners.”

There are insights into his creative process, in this case the writing of his Britten/Auden play, the one set in a not-so-stately home and the movies of The History Boys and The Lady in the Van. There’s a nice smutty episode when the cast of A Habit of Art are listening to sound-effect farts to choose an appropriate one for the actor playing Auden. After the Diaries there are some bits and bobs, including a lovely funeral tribute to John Schlesinger who directed An Englishman Abroad, in my opinion one of the finest hours television has ever produced.

He is offered a cameo in the BBC mini-series of Fanny Hill – playing an old codger whom Fanny “fucks to extinction” – but turns it down: “I’ve always thought of myself a bit of a fraud as an actor.” Back in the 1960s when Beyond the Fringe was on Broadway he declined a supper invitation from Jackie Kennedy, only because of his natural shyness, from which he still suffers. Not only shy but modest. He tells us the critic Robert Hanks remarked that “personally he can have too much of Alan Bennett. I wonder how he thinks I feel.”

One cannot have too much of Mr Bennett.
Posted by David Gee at 04:12 No comments: