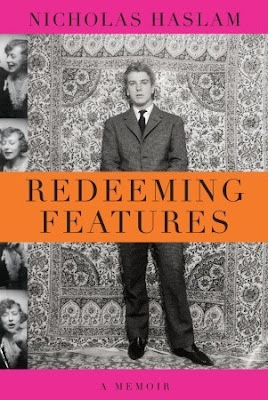 This memoir by interior designer and all-round fashionista Nicky Haslam’s is firmly pitched at celeb-watchers and lovers of gossip. Well, I fit the second of those categories. There’s some fruity stuff here, and if name-dropping were an Olympic sport, Nicky would win platinum!

Haslam was a very pretty boy who has aged into a handsome old geezer, much as Cary Grant and Paul Newman did (but not Marlon Brando or Orson Welles).

Our hero comes from an aristocratic lineage, so the name-dropping starts before he’s born: his mother has Byron’s mistress Lady Caroline Lamb in her family tree and also Giorgiana, the "naughty" 18th-century Duchess of Devonshire memorably played onscreen by Keira Knightley. His father, though not gay, was friends with some notable homosexuals of the 1930s, including Harold Nicholson and Harold Acton. Nicky’s mother had a jet-set life before her marriage, living in Vienna and then in New York where she worked as Fanny Brice’s secretary and visited Fanny’s husband Nick Arnstein in Sing Sing prison with her.

His “top-drawer-ness” is undeniable: he went to the party given by the Queen at Claridges on the evening of Charles and Diana’s wedding. Diana was Nicky’s cousin, but he doesn’t have anything new to add to that sad story.

In his early teens Haslam had sex in a public convenience with Hugh Paddick, whose memory is cherished by fans of Round the Horne. He went to parties where he met Noel Coward, Ivor Novello, Frederick Ashton, Tony Armstrong-Jones, Cecil Beaton – the great and the good (and the gay) of the 1950s. At 15, an Eton schoolboy, Nicky had a brief fling with an (unnamed) actor in New York who took him to meet Tallulah Bankhead.

The names reel by as love affairs and his career with Vogue flit him between London and New York: Garbo and Dietrich, Cole Porter, Jackie Kennedy, Nureyev, Gloria Swanson, Capote, Gore Vidal. He went to a séance with Salvador Dali and his wife at which the ghost of Marilyn Monroe, not surprisingly, failed to appear. He was a fan of Wallis Windsor but not of the Duke, about whom he has some revealing gay gossip. His anecdote of Ethel Merman and Ernest Borgnine (Haslam says they were only married for three weeks: actually it was 32 days!) is an oft-told tale, but always worth telling. And the bitchy tone is enjoyable: Graham Sutherland “seemed less like an artist than a civil servant, dust-dry and persnickety and dainty”; his wife was “somewhat sullen.”

It’s the tidbits of scandal that perk up the page. I must confess to fast-forwarding through some of the endless parties and first nights. Haslam writes well, but the descriptions of house interiors run to Proustian detail and there are lapses into Barbara Cartland phrasing - “a fatally handsome man”, “the shapely white cheeks of Lady Chaplin” – that made me wince and occasionally lol.

Endlessly reinventing himself, Haslam befriended rock stars as well as royals; he sings cabaret and wears leather in old age (which he fought off with plastic surgery). With friends in high – and occasionally low – places, his biography is a gluttonous feast for lovers of celebrity tittle-tattle.
Posted by David Gee at 02:42 No comments: