David at the Movies: "the horror ... the horror" 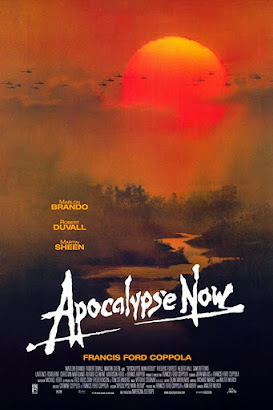 BBCtv just showed this extended (2 hours 53 mins) version of Francis Ford Coppola’s nightmare vision of the Vietnam War. There’s a French plantation scene I don’t remember from 1979 which seemed improbable – in a movie which makes the improbable seem horribly believable – but the stand-out moments still stand out. Robert Duvall (“I love the smell of napalm in the morning”) encouraging his men to surf the incoming tide during a bombardment. The Playboy centrefolds strutting their stuff on a riverside stage. Marlon Brando’s Kurtz like some primeval demonic god in his jungle temple.

There is no iota of romance or sentimentality here: the GIs load an injured toddler into a helicopter but we don’t know if the child lived or died. On the river they rescue a cute puppy from a shoot-out, only to mislay it during the next confrontation.

At the heart of this dark, dark movie (inspired by Joseph Conrad’s African novel Heart of Darkness) is Martin Sheen’s Willard. A bit like Jack Nicholson in The Shining, we see from the start that Willard is a man already damaged, probably a sociopath, but the perilous trip up the river and the confrontation with Kurtz turn him into a psychopath, as deluded and dangerous as the renegade he has been tasked with eliminating.

The Radio Times film critic named this as his favourite picture. Brilliant as it clearly is, it’s not mine (If it’s possible to have a “favourite” Vietnam movie, The Deer Hunter is mine, as much thanks to its beguiling theme music as to its disturbing central storyline). Coppola’s Godfather trilogy (I even admire the operatic Part Three) is in my top ten movies, even in my top three, and I very much admire his gloriously Gothic take on the legend of Dracula. But the power and the sheer brilliance of Apocalypse Now cannot be denied. Very few movies have this intensity.

Brando’s last words – “the horror ... the horror” – haunt Willard. They haunt me.