From the SUSSEX EXPRESS and HASTINGS OBSERVER - this week

Newhaven author David Gee is in print with Lillian And The Italians, published by The Conrad Press, Canterbury at £9.99 paperback, £3.99 Kindle, available from Amazon and bookshops – a book about second chances. 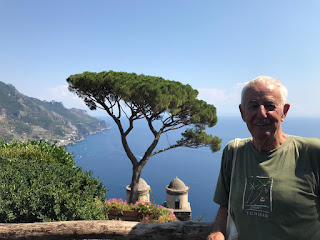 David Gee is the pen-name of David Helsdon, aged 78. He says: “I set out to write a novel in which a widow gets a second bite of the cherry.

“Searching for her wayward son Andrew in the summer of 1966, Lillian Rutherford, a 50-year-old widow from Hastings, goes to Venice, where she meets the ex-gigolo who has shared the last four years of Andrew’s life. His revelations about Andrew’s bisexuality shock her.

“Going on to Amalfi, she meets Prince Massimo Monfalcone, whose playboy son has disappeared with Andrew.

“Massimo distracts Lillian with his life story: his first wife was murdered in a Sicilian blood-feud; his second wife killed herself because of his infidelity. As they wait for news of their sons, a bond grows between Lillian and the prince. A different world – a different life – opens up for her. Is she ready for this?

“The book will, I hope, appeal to women of all ages. Lillian learns in Venice that her son has had male as well as female lovers, so I hope this will draw in LGBT readers. Prince Massimo’s life includes 50 years of Mafia history, so maybe fans of The Godfather – and movie producers! – will be attracted.

“Lillian and the Italians is a book for women who worry that their lives will flatline after their children – or their husbands – leave home.

“I promised my mother years ago that I would write a novel in which an English widow finds romance and adventure in Italy. Lillian’s girlhood and a late-term miscarriage are taken from my mother’s life story, although she was widowed at an earlier age and fate did not bring her a Sicilian prince; Alzheimer’s took her down a different road. Lillian and the Italians is the life she should have had.

“My mother accompanied me on some of my research trips to Venice, Amalfi and Sicily. The first draft of the book was largely written on location, in cafes and bars and sitting on church steps.

“I started it in 1976 but then my job took me overseas and I didn’t finish it until the 1990s. I’ve had to overcome a surprising amount of resistance from editors and literary agents to a book with a heroine aged fifty; they prefer a book with a sexy young bimbo!

“I’ve started a follow-on novel in which Lillian’s son’s life intersects with a hotel owner from Hastings in Spain in 1968, the year of student protests in Europe and anti-war protests in the US. Hopefully it will soon be possible to fly to Spain for some location research. For now I’m relying on memories of my first visit to Benidorm in the 1960s when Benidorm had had an unfinished promenade and very little highrise – not the Benidorm we know today.”

This link will take you to the full article online: